The features that I expect from a audio player are somewhat odd. If you ask any one what they want from a MP3 software, they will say audio quality or visualizations or something like that. Not me – what I want is an ability to control the software easily.

I don’t hear music to enjoy it. I just turn it on when coding – I will not even be listening to it consciously. So I need a player that I can control without getting distracted from the task at hand.

Winamp(yes, that Windows app) was great at this. It had all the features I was looking for…

As long as you use a neat skin.

I don’t want to maintain playlists or anything like that – if I get an MP3 file I just put it in a folder called Music. It is the responsibility of the MP3 player to find it and add it to the playlist. Winamp 5+ had a feature called media library that did this.

As I said earlier, I am am passive listener of music – I want the Audio player to stay out of my way. I don’t want a taskbar entry – it should live in the system tray.

It is very important in Windows as it has just one taskbar and every open application is competing for space in it. But in linux, this is not so big an issue. I have eight desktops – with a taskbar for each.

I must be able to pause/play a song using a shortcut key – from any application. If I am working on some code, I don’t want to pull up the player to pause it. Winamp had this feature – its called Global HotKeys 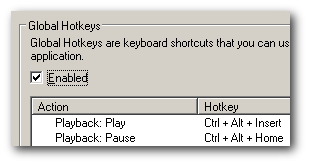 When I moved from Windows to Linux, these were the features I looked for in an MP3 player.

Other features I look for…

In the next few post, I am going to compare all the popular audio players available in Linux – and this is what I will be looking for.